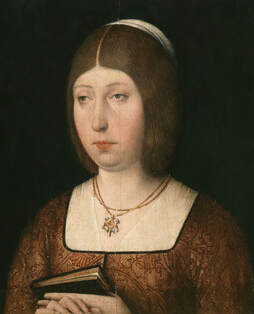 Queen Isabella of Spain, Wikimedia Commons
When Columbus sailed the ocean blue and began lasting contact between the Americas and Afro-Eurasia, it changed gender dynamics in the New World substantially. Aztec and Inca cultures interacting with the Spanish patriarchies for the first time, changed considerably from what accounts of life before the Spanish and Portuguese exist, and perhaps immeasurably in the absence of pre-contact records. Spanish men explored and conquered the new world, but Indigenous women were all over those interactions.

First Contact: When the Spanish first arrived on the island of Hispaniola, they had positive interactions with the Native Americans there. Columbus wrote to his patron Queen Isabella and described their kindness and all of the gifts that they bestowed upon him in his writings. But then things changed, leaving Isabella in her instructions to the Spanish to write, “Because we have been informed that some Christians in the above said islands, and especially in Hispaniola, have taken the Indians’ wives and other things from them against their will, you shall give orders, as soon as you arrive, that everything taken from the Indians against their will be returned . . . and if Spaniards should wish to marry Indian women, the marriages should be entered into willingly by both parties and not made by force.” Sadly, the need for this declaration gives us some insight into the ways that indigenous women in the Tiano community were treated.

Nevertheless, the treatment of the Tiano people on Hispaniola persisted. They were subjected to forced labor, raped, mutilated, and other horrific crimes. The Tiano died in mass numbers after being exposed to European diseases and subjected to horrific living conditions. On Haiti, Europeans pillaged native villages taking women and children as slaves for labor and for sex. ​ 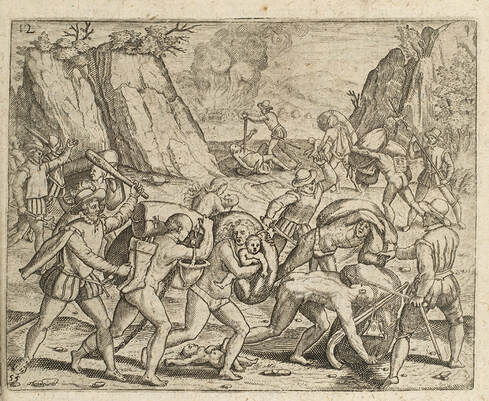 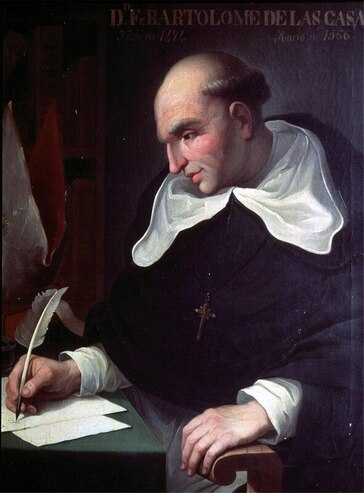 Bartelome de la Casas, Wikimedia Commons
Bartelome de la Casas: Bartelome de la Casas was a European priest who made several trips to the Americas and came to abhor the treatment of the indigenous population he witnessed. We stan de la Casas! He recorded his observations meticulously. Of women and sexual relations among the indigenous, he wrote: “Marriage laws are non-existent: men and women alike choose their mates and leave them as they please, without offense, jealousy or anger. They multiply in great abundance; pregnant women work to the last minute and give birth almost painlessly; up the next day, they bathe in the river and are as clean and healthy as before giving birth. If they tire of their men, they give themselves abortions with herbs that force stillbirths, covering their shameful parts with leaves or cotton cloth; although on the whole, Indian men and women look upon total nakedness with as much casualness as we look upon a man’s head or at his hands.”

He wrote that the Spanish became more conceited and mistreated the natives with growing contempt. He said they “thought nothing of knifing Indians by tens and twenties and of cutting slices off them to test the sharpness of their blades.”

Indigenous men, women, and children were forced to search for gold that the Spanish could bring back to their investors. The Spanish sought quick fortunes and violently used the natives as a means to that end. La Casas described the toll this inflicted on women and their families. He said, “Thus husbands and wives were together only once every eight or ten months and when they met they were so exhausted and depressed on both sides . . . they ceased to procreate. As for the newly born, they died early because their mothers, overworked and famished, had no milk to nurse them, and for this reason, while I was in Cuba, 7000 children died in three months. Some mothers even drowned their babies from sheer desperation. . . . In this way, husbands died in the mines, wives died at work, and children died from lack of milk . . . and in a short time this land which was so great, so powerful and fertile . . . was depopulated. . . . My eyes have seen these acts so foreign to human nature, and now I tremble as I write. . . . there were 60,000 people living on this island, including the Indians; so that from 1494 to 1508, over three million people had perished from war, slavery, and the mines. Who in future generations will believe this? I myself writing it as a knowledgeable eyewitness can hardly believe it...” He took his case back to Europe where a trial was held–Isabella long had passed. The Spanish were found to have violated human decency in their treatment of the natives, but it did little to change what was happening an ocean away.

Gender Imbalance, Public Domain
Gender Imbalance: In the Spanish and Portuguese colonies, there was a ratio of one woman for every four men. This gender imbalance led to many Spanish men taking indigenous or African wives. The Spanish colonies therefore were much more integrated between the races than their French or English counterparts.

The conjugal relations between Spanish men and native women are controversial because many of these relationships were coercive and involved rape, sexual assault, and domestic slavery. In other cases native women latched themselves to European men for protection of their children and extended families. Despite the power differential, there is no doubt that in some of these relationships genuine affection occurred between couples.

A generation later, mixed-race relationships between Spanish men and Indian women resulted in a new class of people called the “Mestizos.” Eventually, this class of people would become the largest in Mexico. The Spanish degraded the Mestizo class, regarding them as illegitimate. Women of this class, called the “Mestizas,” were of the labor class, serving as domestic servants, working in shops as retailers, and manufacturing items like candles. Some of these women became very wealthy. An illiterate Mastiza named Mencia Perez was married and widowed twice to two wealthy Spanish men. She assumed responsibility for their businesses, becoming a very rich woman by the 1590s– but this was the exception, not the rule.

For average women, outside the elite sphere, conquest meant sexual violence and abuse. Rape was common as enslaved women worked under the authority of European men and more often forced to perform sexual acts. 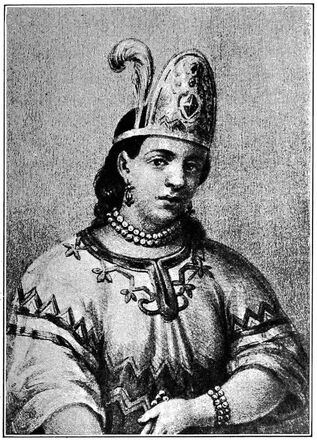 Malinche, Wikimedia Commons
Malinzin: Malinzin, or Malinche, was one of 20 female captives given by the Aztecs to Cortes as a gift. She became Cortez‘s interpreter and was witness to most of his violent conquest of Mexico, which included deception and massacres of native people. Um, how do you say dirtbag in Yucatec and Spanish? The extent of her efforts and support for Cortés is questionable at best. For example, she supposedly warned the Spanish of an ambush she overhead being planned, leading the Spanish to massacre the people in question, but others say that she may have just been used by the Spanish as an excuse for their actions. We do know that she gave birth to Cortes’ first son, and thereby became a symbol of the American future: one forever influenced by Spain.

La Malinche was used as a propaganda tool for the Spanish who argued the indigenous peoples wanted them there, while she is remembered in much of Latin History as a traitor. One version of her name would even become Mexican slang, “malinchista,” referring to someone who abandons their people for another.

Of course, we do not have records from her directly, which means she will remain a complicated figure of history. Was she the cunning girl who saw an opportunity out of slavery with the Spanish? Was she the traitor who turned on her people for her own gain? Or, was she simply a person trying to survive in a chaotic and cruel world? She was an enslaved woman who found a way to survive and achieve some form of agency, and while she may have aided them, the Spanish remain the real culprit of the horrors experienced in Latin America. 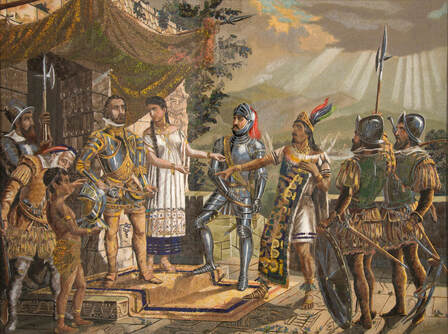 Intermarriages, Wikimedia Commons
Unmarried Spanish men in the new colonies were seen as a problem by the Spanish Crown, so by the mid 1500s there was a strong effort to send more Spanish women as wives. Spanish women tended to marry older and wealthier men, which made widows incredibly common. In the Spanish empire, unlike the English, widows were allowed to inherit money easily. I’m getting  a Real Housewives of New World colonization vibe. Additionally the presence of native women as domestic servants made life in the Spanish colonies for Spanish women enticing and elevated the class that they came from back in Europe. Maria de Carranza encouraged her sister-in-law to come quickly saying, “[leave] the poverty and need which people suffer in Spain!”

All Spanish women shared the privileges of their race with their husbands, but they were clearly subordinate to them because of their gender. Spanish women were barred from holding public office, viewed as weak, and in need of protection. They bore the Spanish legitimate children, the means for transmitting male wealth, and ensuring their legacy into future generations. This continued the Spanish legacy of focusing on “purity of blood“ seen previously in their liaisons with the Jews and Muslims under Isabella.

The later English colonies also dealt with a gender imbalance, but actively worked to import more women as indentured servants, tobacco wives, and sometimes even by kidnapping them off the streets. You know the saying: If you love someone, set them free. If they come back, they’re yours; if they don’t, they were likely snatched on your behalf.

Mistreatment, murder, and diseases they didn’t have immunity to had devastating impacts on indigenous populations in the Americas. Some estimate that 90% of the population died. Aside from the horrific human cost, this presented an economic predicament for those settling and establishing plantations. Who would help “civilize” and work the land? They sought enslaved people that were immune to these diseases and would therefore provide a more stable workforce. This led to the importation of African slaves. 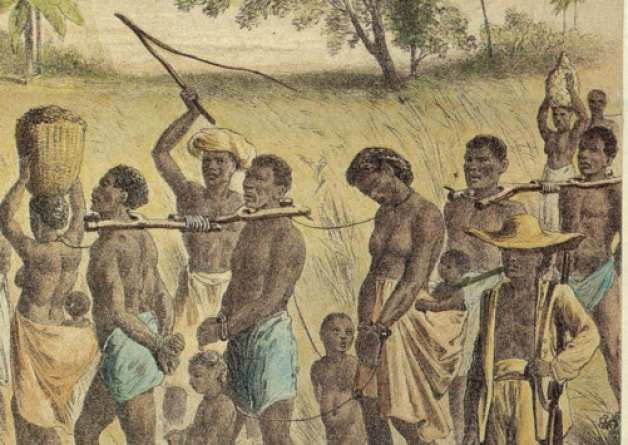 African Slave Trade, Public Domain
Conclusion: Indigenous women lost so much. They were defined as minors under Spanish law, which led to their increasing exclusion from the courts and social systems. Their legal status made it difficult for them to maintain any property rights.

But nevertheless these women persisted. For example, despite the colonial patriarchy imposed on them, Andean and Mayan women continued the tradition of leaving personal property to their female descendants.

By the end of this era, so much remained in question. Could the Americas recover from this disgrace in their history? How would indigenous women carry on?

Learn how to teach with inquiry.
Lesson Plans from Other Organizations