What is the Eckert test? 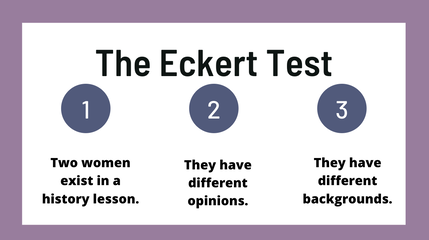 Remedial Herstory applied the "Bechdel Test" for films to the history curriculum its called the Eckert Test. The Eckert Test emerged from frustration over how many times teachers fail to bring a female perspective into their history lessons. The Eckert Test is a system to hold educators accountable to a more comprehensive and diverse women’s history.

How does it work?
The test is this: 1. There are two women in the lesson. 2. Those two women have different opinions. 3. They represent different backgrounds: racial, sexual identity, ethnic, religious, generational, or economic. At first many teachers just started adding women’s sources to the inquiries, or lessons, they already have. This is called "pop-up" history and it forces one woman to represent and speak for all women. There isn't WOMEN’s diversity. Men get to be diverse and have disagreements in history, but women who pop into history classes don’t get that luxury enough.

Not everyone can name two women from every era, but they could name two men and isn’t that the problem? It’s challenging, but with research it is doable in EVERY period and region of the world as far back as you can go, even Mesopotamia. Start with Kubaba the first woman monarch in world history and Enheduanna the first priest, historian, and poet (male or female) EVER, and you're off to a great start.

But, do we know enough about these early women to have a colorful debate or discussion in a history class?
​Yes. In almost every case, enough is known to work with these women, their stories, their ideas, or their legacies.

Current practice in education is for students to BECOME historians themselves using primary sources from the pasts. So how amazing that this far back there are sources not only ABOUT women, but BY women!