Why do we need HERstory? 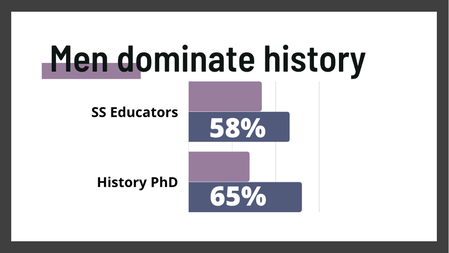 ​It sometimes surprises people to learn that secondary and collegiate history is not only dominated by the stories and accomplishments of men, but also primarily taught and researched by men. 58 percent of US social studies teachers are men and 65 percent of history professors are men. So while most of us while women represent 75% of all educators, it’s important to ask why men would have a stronghold on history?
​Additional relevant data:
​• 84 percent of US social studies teachers are white.
• 4 percent of history best sellers were written by women.
• Textbooks name men at 4 times the rate of women.
​
Men teaching history is not inherently problematic, except that only 6 percent of male historians write about women. If scholars are not writing about women it won’t trickle down to the teachers. Teachers teach what they know and most teachers are not taught women’s history…  HUGE names and topics are lost on practicing educators. The primary cause? Women’s history is not required to graduate with a history degree! Teachers who took mainstream routes to teacher certification never took women’s history. Often women’s history is offered as an elective or independent course: Women’s Studies or Gender Studies. What message does that send? That there is HISTORY, and then also women’s history? 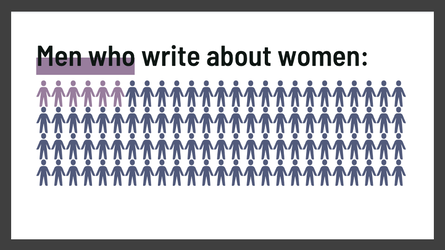 Additional relevant data:
• Standards name men at 3 times the rate of women.
• 394 out of over 5 thousand outdoor statues in the US are of women.
• 9 out of 112 statues in the US Capitol are of women.
​
Studies have show that the effect of a lack of research and emphasis on women in collegiate history trickles down to teachers. 91% of teachers in Orange County Schools incorporate women’s voices in the curriculum, only 25% do it once a week or more, and 46% do it once a month or less (5% of available class time)!

State standards and textbooks here are problematic. The National Women’s History Museum found that standards overemphasized women’s domestic role instead of acknowledging her contributions to every field. The NCSS Framework is largely skill centered and leaves the content up to the states, and since so few states have solid guidelines, this leaves an interesting grey area that can be exploited.

Textbooks remain abysmal. Mary Kay Thompson Tetreault’s analysis of textbooks from her 1986 study titled, “Integrating Women's History: The Case of United States History High School Textbooks" is sadly not that outdated. It provides an outstanding framework for how to analyze a textbook and what texts should be including about women. She found that the textbooks in her time failed to acknowledge that women’s history has been omitted from the textbooks. There is no discussion on how the various points of emphasis in the public sphere have fundamentally and systematically excluded women. Students are not guided in any way to understanding that the exclusion of women is only half the story. The failure of the texts to include substantive information on the effect that race, ethnicity, and social class had on women’s experiences leaves and middle-class women as the norm and virtually excludes minority groups. Like history, women’s history was white washed.

​Kay Chick did a more quantitative study of textbooks in 2006 and found that elementary school textbooks were more gender equal than textbooks geared for older students. She critiqued the American Historical Association. She said, “Since the American Historical Association has called for gender balance, they must be held accountable for defining it. If they are calling for a 50/50 split in the gender representations of historical figures, textbook publishers have yet to meet that goal.” The AHA updated their guidelines in 2018, but they remain non-specific, with no outline for an appropriate ratio. 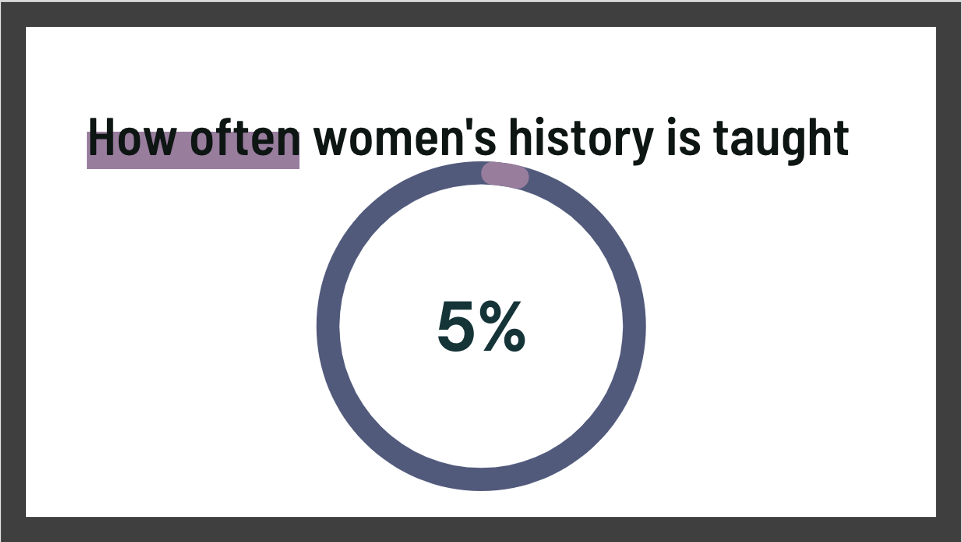 ​The BIGGEST BARRIER to teaching women’s history is our own educations. Those of us who took mainstream routes to teacher certification never took women’s history. How are we supposed to teach it? If you examine where women’s history is taught, you learn that women’s history is a different subject entirely: Women’s Studies or Gender Studies. Although the skill set and learning objectives are the same, the subjects are taught separately. What message does that send? That there is HISTORY, and then also women’s history? Women’s Studies is predominantly taught by women to women, and men intentionally or unintentionally are often not in the room. So learning about women’s experience in history is something only women do. These enlightened women then find themselves alone in a world of people who only learned his-story.

​If our own educations were problematic, the professional development offered to teachers is equally problematic. Social Studies and Science teachers are the least likely to receive professional development in their area of study—this should literally shock no one who following the state of our democracy and the climate crisis. Social studies has the least professional development dedicated to it because it is the “least important” as dictated by standardized testing and the new emphasis on STEM, and has no clear national content standards. It is in this laissez-faire tumult that women’s history is lost. It comes down to the wills of individual teachers, administrators, or even uneducated school boards to decide what is taught: a recipe ripe for failure. Women’s studies are bound to the social studies and the social studies are on the chopping block.

Integrating the stories of women is only half the battle. Girls also need to feel like they belong in history classrooms and that they could have a career in history in order to curb these trends. Study's continue to show that:​

“The problems start with the students attracted to history. Over the past 20 years history has graduated some of the smallest proportions of female undergraduates of any field in higher education—well below all of the other humanities and social science disciplines outside of religious studies…The most troubling aspect of the trends in female student enrollment and graduation is the way history has plateaued at both the undergraduate and graduate level. If women continue to earn barely 40 percent of the degrees in history, that seems to set a rather hard ceiling for the representation of women among those employed in the discipline.”
Robert B. Townsend, “WHAT THE DATA REVEALS ABOUT WOMEN HISTORIANS,” Perspectives on History

​To curb these data, inclusive, feminist pedagogies are needed.

Women are not an interest group: they are half of humanity! Women do not agree, they are diverse, and have been present throughout history. We need to QUESTION the history that we think we know. We all need to relearn history to include herstory. When you hear a story from the past that doesn’t include women, you have to literally break your brain and ask yourself wait where are the women?

Be part of the solution.