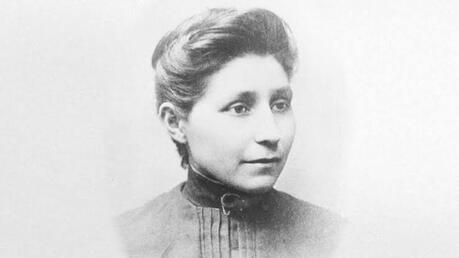 Public Domain
Before the US was, the US, the land was home to numerous Native American nations whose diversity, then and now, rivals that of Eurasia. Each of the hundreds of nations have, and had, their own language, religion, customs, governance structure, judicial system, and history. The role of women in Native culture is as complex and different as the nations from which they come.

Like most cultures, so much depended on where the nation was located and the particular needs of that geography and environment dictated the various roles people within that society played. Northwestern nations lived on rivers and relied on fishing, while those on the plains followed buffalo and planted corn for their livelihood. While gender usually plays a role in determining responsibilities, gender did not limit women in many Native cultures.

Because there are many different cultural contexts, it is difficult but not impossible to generalize about the role that women in Native communities played… so we’re going to try.

Investigating the lives of women native to North America is deeply challenging because the experiences of Indigenous people varied from region to region, community to community, and even within communities. Native people are diverse, their societies rich, complex, and enduring. Gender was, however, significant in the lives of early Native peoples wherever they were. 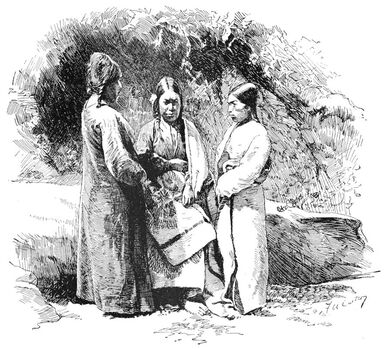 Public Domain
Family and community systems brought Native people together under mutual reliance and respect. As in many places and cultures, men were generally responsible for hunting, warfare, and interacting with outsiders, therefore they had more visible roles. This is why the names of male Natives tend to pop out more in our histories.

Role in Governance: Native women were active in community governance and activities. Many nations, perhaps one-fourth if not a majority, were organized matrilineally, where new husbands would come to live with the wife’s family and inheritance was passed down from the mother.

In matrilineal societies, women owned the family’s home and goods. They did all the agricultural production and reared children. They also held important political and economic power.

The Nations of the Iroquois Confederacy, or the Haudenosaunee (hoe-deh-no-SHOW-nee) were all led matrilineally– with women at the helm. Clan leaders selected a male chief to represent the nation and they removed them when the women were dissatisfied.

In other nations, women would even become warriors. Some were able to earn the title of chief because of their own achievement on the battlefield or due to their husband’s death. In the midwest, women often helped hunt and harvest buffalo. Women were responsible for utilizing the entirety of the animal. In these communities the relationship between gender and service to the nation was much less significant.

​Gender Norms: In others however, gender determined so much about the contributions to the community a person would make. For example, the Cherokee of the Southeast assigned male and female infants a bow or a sifter at birth to connect them to their future lives as hunters and fishers or agricultural production. The Iroquois of the Northeast, also known as the Haudenosaunee (hoe-deh-no-SHOW-nee), classified the forest as male and the village as female. ​ European sketches showing indigenous women farming, Library of Congress
But for Indigenous people, gender wasn’t always strictly binary. The Dine and Navajo recognized six different genders! That’s awesome! The Ojibwe did have male and female roles, but individuals could align with the gender of their choice.

Despite the birth rituals, the Cherokee also allowed for gender variance and even built it into their language. A variety of words in the Cherokee language describe people who are “Two-Spirit” or who’s gender expression or identity fits outside the binary male or female. There are words that translate to he or she thinks like a man or woman. Fascinating!
​
In most Native communities, women had significant spiritual roles. They often served as spiritual leaders, healers, and in political leadership. In many Native American creation stories, one of the female characters created life, nature, and Earth through their body through some sort of birth.

The Pueblo of the Southwest have a fascinating origin story where the Corn Mother gave birth to human life and corn sprouted up through the ground. All babies were given an ear of corn at birth to recognize this sacred connection to the Mother. This story illustrates the centrality of the feminine to Pueblo life.

The belief in women’s inherent spirituality lended to their role as healers. Many nations believed that the women had more healing power. Women had extensive knowledge of plants and medicines for healing and were vital to the nation's success. Most Native American women were master craftspeople producing blankets, baskets, jewelry and pottery. Because women work– and always have. 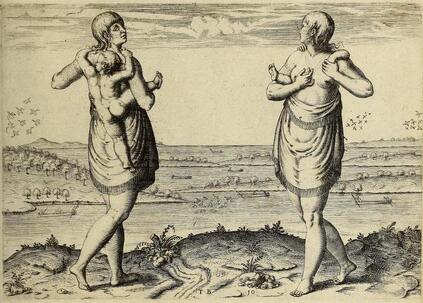 European sketches of indigenous mothers, Library of Congress
Marriage and Sexual Freedoms: Marriage and sexual activity in Native communities was extremely varied and sex was not necessarily only practiced within marriage and often began at a young age.  Some nations were polygamous– meaning people had multiple partners in their lifetime or at the same time– a practice still in place in some Mormon and Muslim families today. Some nations had formal marriage ceremonies, while others considered a couple married when they began living together.

Women’s power in relationships and within the nation showed most notably in divorce. Both men and women could decide to end a marriage or relationship, but in many nations, women owned all the household belongings, so men leaving marriages could only take the items they had when they began the relationship. Unlike the patriarchal societies of Eurasia where fathers owned their children and mothers had little rights to them, children in Native societies often belonged exclusively to their mother. When a widow remarried, her children from the prior marriage would be adopted by the new husband.

Native cultures had different practices around menstruation. In some, women inhabited separate quarters during menstruation. For the Ojibwe, women were considered most powerful during that time of the month. Generally, most cultures celebrated female puberty, rather than shamed it. The Hupa people, for instance, celebrate a 3-10 day coming-of-age ceremony following the first menstruation– where was that when I was a girl?

Some nations would not allow a couple to have sex until their child reached a certain age, although this practice varied considerably, from the child’s ability to crawl to closer to ten years, as practiced by the Cheyenne. As a result, Native American families had about three children, while Eurasian families would sometimes have up to fourteen children.
Native women did what the later Europeans considered “men’s work.” But Native Americans believed in equality, fairness, and autonomy– novel concepts. Most scholars agree that Native American women had more authority and independence than their European counterparts. ​

19th Century sketch of an Indigenous woman, Library of Congress
Property Ownership: The importance of property ownership depended on where the nation lived and what natural resources the nation used to sustain itself.

In the Pacific Northwest, trees and acorns were incredibly important to their diet, so ownership of trees was passed down from mother to daughter.

In the east, some Native nations placed emphasis on actual land ownership, and surprise surprise, women often owned the land. The Algonquin and other North Central nations used markers, like Eurasians, to show where one family’s property began and ended.

Other nations, like the Lenape, thought of ownership more like leasing, where someone had the right to use the land, but that it belonged to the nation as a whole. To the Iroquois, or Haudenosaunee (hoe-deh-no-SHOW-nee), women owned the fields they worked, the longhouses, and everything in them. The Hopi women owned the pueblos and the land which was inherited matrilineally.

One early Native source said, “You ought to hear and listen to what we women shall speak . . . for we are the owners of this land and it is ours.” Native Americans women engaged in agricultural activity for generations prior to European contact. 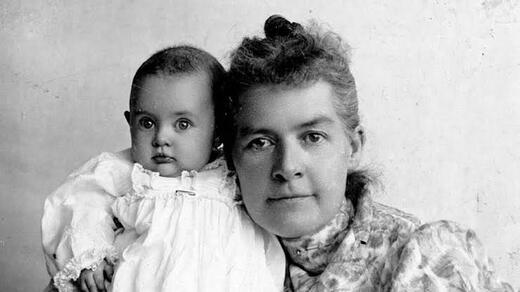 Plains Natives, Public Domain
On the Great Plains, where buffalo were essential and nations migrated to follow them, their inheritance rules put emphasis on objects that people moved with them. When these nations, like the Lakota and the Pawnee got horses brought from Europe, they became the predominant source of wealth. Everyone, even children, had the right to own horses.

Domesticating animals, other than horses, was rare in Native cultures because they tended to believe that animals had equal spiritual rights as humans and because it disrupted gendered distributions of labor.

We have few reliable written sources about Native women’s lives before contact, so unfortunately we have to turn to white men’s interpretation of Natives for some of our sources. In 1644, the Rev. John Megalopensis, minister at a Dutch Church in New Netherlands (modern day New York) said that Native American women were, “obliged to prepare the Land, to mow, to plant, and do everything; the Men do nothing except hunting, fishing, and going to War against their Enemies. . .” Chill John. Others described Native women as “slaves” to the men, probably because they didn’t really understand, or care to understand, the way Natives shared the burden of labor!

European Arrival: After the arrival of more European explorers 90 to 95 percent of the Indiginous population was wiped out by diseases brought by the Europeans. Territorial disputes and the resulting conflicts also had devastating impacts on the already weakened Native populations.

Scholars disagree on how European expansion and migration impacted Native women. Some argue that, after contact, women’s authority declined because of a term called cultural assimilation– where cultures shift and change to become similar to the dominant culture. White men preferred to deal with Native men in trade and political negotiations, despite women sitting at the helm in most Native communities. White Christian leaders demanded of their Native converts that they follow patriarchal norms and European gender norms. 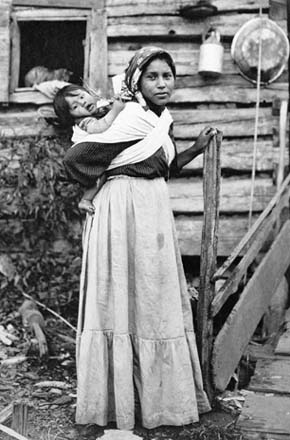 Motherhood, Wikimedia Commons
And while that may be true in some places, other scholars insist that women’s leadership remained central to other societies. Matrilineal inheritance of clan identity remained important to many communities, as evidenced by women’s central role in those communities long after European contact and today.

For example, in 1787, a Cherokee woman appealed to Benjamin Franklin on behalf of her community. She said, “. . . ought to mind what a woman says, and look upon her as a mother – and I have Taken the prevelage to Speak to you as my own Children . . . and I am in hopes that you have a beloved woman amongst you who will help to put her children right if they do wrong, as I shall do the same. . . . ” She played the “mother card,” and I’m here for it.

Later in the 1800s when the Cherokee nation were increasingly forced out of their homes, groups of Cherokee women petitioned their Council to stand their ground. They forcefully stated, “[b]eloved children… God gave us to inhabit and raise provisions… [do not] part with any more lands.”

These quotes give merit to the suggestion that women’s roles remained and remain central to the leadership of at least some Native communities.

​By the end of this era, so much remained in question. How would these rich cultures continue? What would happen to the Native people that survived European arrival and what role would women play in that survival? What efforts would be made to resist European expansion? And how many would assimilate to European norms and culture?

Yazzie, Jolene. “Why are Diné LGBTQ+ and Two Spirit people being denied access to ceremony? We should not be discriminated against when our gender roles don’t match our sex.” High Country News. January 7, 2020. https://www.hcn.org/issues/52.2/indigenous-affairs-why-are-dine-lgbtq-and-two-spirit-people-being-denied-access-to-ceremony#:~:text=In%20the%20Din%C3%A9%20language%2C%20there,N%C3%A1dleeh%20Hastii%20(gay%20man).