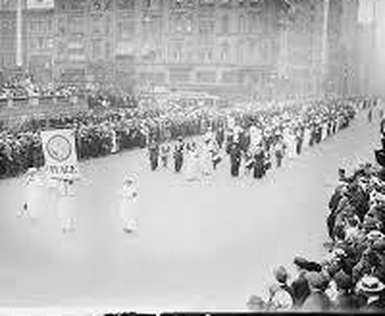 World War I was named “The Great War” or more epically, “The War to End All Wars”. Trench warfare and mass casualties would soon define the era, but the actions of women here at home would define a generation, and shape women’s roles in America forever.

WWI began as a series of chain reactions to growing nationalism, industrialism, and complex alliances throughout Europe. Many nations would dive headlong into a conflict that would leave far too many dead, and the earth itself carved up by trenches and heavy artillery.

While each nation had varying reasons for joining and staying in the war, what each nation had in common were deep societal issues that bubbled at the surface before, during, and after the war. America was no different. Nationalism, nativism, racism, and sexism were alive and well in the land of the free, even as she went to Europe on a mission to “make the world safe for democracy”.

At the start of the war in Europe, America declared its neutrality, intending to stay safe on its side of the Atlantic. As media outlets reported the high casualties, many Americans supported this decision; some aggressively so, like the Woman’s Peace Party.

Earlier peace efforts and organizations had often underrepresented women or kept them from leadership roles. Yet, within a month of the start of WWI in 1914, the Woman’s Peace Parade featured 1,500 women marching down NYC’s 5th Avenue. They marched silently, wearing all black, as a reminder of the mourning women nationwide would face if their country involved their sons, husbands, or fathers in this war.

After the march, seventy-year-old veteran of the Women’s Suffrage Movement, Fanny Garrison Villard, organized the group into a permanent organization. She also linked the group with key figures of women’s organizations like Carrie Chapman Catt, president of NAWSA, to prove to American women across the board that war should be avoided. They would also send delegates to the 1915 Congress of Women in Europe who sought their own resolution to the war.
Despite the best efforts of this group and others like it, peace did not come right away, nor could American neutrality last forever. By the end of 1916, it was clear that America was edging closer to war.

Thousands of Americans joined the American Preparedness Movement in preparation for America’s eventual entry for the war, with many of America’s women supporting them. At the same time, anti-war groups met regularly with President Wilson to continue to convince him that America had her own issues to tend to (Suffrage anyone?!).

This division would continue throughout America’s participation in the war.

​Despite many not agreeing with their stance of peace, the women-led peace organizations were correct in their depiction of mourning that Americans would soon face. European families had been facing losses for years and now American families were feeling that pain as the casualty lists began to grow.

Families recognized the service of their loved ones by displaying a blue banner out of their windows, and if that soldier lost their life, a gold star was added. President Wilson greatly opposed the public reminder that American men were dying in the service giving the division in the country but did approve the wearing of black armbands with a gold star by mothers and wives who had a family member who died in the military service to the United States.

It was Grace Darling Seribold in the decade after the war that united the Gold Star Mothers and convinced the federal government to finance their trips to Europe to visit their sons’ graves. The Gold Star Mothers organization still exists today to support families whose sons and daughters are lost in the military service.

It would not only be men who made families worry and mourn. Even while America was still neutral, many Americans made their way to Europe as volunteers. Men joined the armies of Europe, and hundreds of American women served in military hospitals, attempting to tackle the horror of industrial war. Within a month of America declaring war, American nurses and doctors would be the first servicemembers to arrive in Europe. Over 20,000 American women would serve in foreign hospitals, though that number would have been significantly higher if African American and immigrant women were not rejected. Likewise, the Red Cross’s number of volunteers who remained mostly stateside, rose over eight million.

​Nurses serving in the war were meant to be safe from the horrors of combat, but in an effort to save as many lives as possible, many agreed to work closer and closer to the front lines. One American woman, Beatrice MacDonald, was so close to the front lines that she took shrapnel from an artillery blast that left her with only one eye. She refused to go home, and served until the very end of the war, earning herself the Distinguished Service Cross.

Women were also recruited into the military in order to free men up for the battlefield. This would include some nurses, but women joined the Army, Navy, and Marine Corps as drivers, telephone and radio operators, clerical workers, laborers, and more. By the end of the war, 11,000 women had joined the Navy, over 7,000 women applied to the Army, and over two hundred were sent overseas as radio and telephone operators, and over 300 women would join the Marine Corps. Some left the war highly decorated, including Lenah Sutcliffe Higbee, who was chief of the Navy Nursing Corps and was the first woman awarded the Navy Cross. This award is only surpassed by the Medal of Honor in its esteem.

As with nurses, women were kept from combat, but not from risk. Six hundred women lost their lives serving in World War I.

The National Parks Service may have articulated this best when they wrote: “The Service of American women at war cost them more than just the burden of putting their lives on hold, deferring marriage and children, or pursuing higher education. The sacrifice of these women went far beyond that; in all more than six-hundred of these patriotic women lost their lives in service to their nation. The question was, how would the nation return that debt?”

This question is fitting, as America still denied women basic rights of citizenship, like the right to vote. The matter of women’s suffrage would be at the forefront despite the war, and President Wilson was not happy about it. Wilson thought it was a distraction from larger matters, and would even imprison women protesting for this right amidst the war.
The Women’s Suffrage Movement has been ongoing since America’s earliest colonial roots, but formally began in 1848. By the time World War I came around, women were not only sick of waiting, but Suffragists were also at war with themselves, as the major parties and feminists within the movement divided over opinions on goals, methods, and the extremes they were willing to take to reach their goals.

By 1890, the movement was mainly under the leadership of the National American Woman Suffrage Association, with Elizabeth Cady Stanton serving as their first president.

Several Western states soon started to extend the vote to women, and by 1916, Jeanette Rankin became the first American woman to hold federal office as a representative of Montana. However, the states in the East and South were holding firm against suffrage. NAWSA’s president Carrie Chapman Catt called for a national push. Women in states that already had the vote should push for a federal amendment, women in states without it should continue to work on the state level.

For some, these methods were simply too slow. NAWSA saw a splinter organization form, called the National Woman’s Party. This group, led by Alice Paul, Lucy Burns, Gail Laughlin, and more, decided that asking for the vote had long proven ineffective, and it was time to demand it. Paul proclaimed that, “There will never be a new world order until women are a part of it.”

The NWP protested at the White House, held parades, published more militant literature, and even used hunger strikes to make their point known. Paul and a number of her followers would be arrested and spend time in jail for their tactics, but their message was clear: It was time for women to be recognized politically!

Paul would also address the elephant in the room, being the international crisis of war. She said, “The world crisis came about without women having anything to do with it. If the women of the world had not been excluded from world affairs, things today might have been different.”

President Wilson, who had never been a big supporter of women’s rights, was even compelled to call upon Congress for suffrage. When he asked them to pass the 19th Amendment, he said, “I regard the concurrence of the Senate in the constitutional amendment proposing the extension of the suffrage to women as vitally essential to the successful prosecution of the great war of humanity in which we are engaged. The tasks of the women lie at the very heart of the war, and I know how much stronger that heart will beat if you do this just thing and show our women that you trust them as much as you in fact and of necessity depend upon them.”

In the end, the work of women in the war effort, the sacrifices made by American women during this time, the protests and demands of women’s organizations helped them to achieve a goal more than 150 years in the making.

By the end of this era, so much remained in question. President Wilson claimed America’s participation in the war was to make the world safe for democracy, but was America itself safe for democracy when half of its population was barred from voting based on their gender alone? To what extent did environment and timing make catalysts for social change?